Delivered into the Luftwaffe air forces in 6 He 111 (together with the Do-17 and Ju-86) was one of the first really modern level bomber deployed by the Luftwaffe and over all superior to all other air forces aircraft, let alone bombers! Over time improvements to its design eventually allowed it to deliver 2000kg and larger bomb loads anywhere in Continental Europe from central Germany, and preferably without the need for fighter escort. While the requirement to be capable of unescorted bomber missions was realized the day the first example was flown in 1936, by 1940 speed and firepower of new fighters, including both the RAF's Spitfire and Hurricane fighters it would encounter over Britain and the English channel, proved that the He 111 could not operate unescorted any more.

The type modeled in game is the H-2 variant. Initially unarmored and only 3 fast firing MG-15 defenisve guns, later production units quickly gained 2 more MG-15's with other improvements, and with kits installed at the bomber fields during the crash upgrade program. Thus was first shock to the Luftwaffe on how quickly advanced war machines can be surpassed.

While slow and lumbering, its docile handling due to its massive wing area makes it an exceptional level bomber. With 5 MG-15 gun positions covering a wide area the He 111 can defend itself if the chips are down, and in cooperative formations with fighter escort the He 111 can really do a lot of damage through having a large bomb load. Another virtue is its tough structure, making it very resistant to damage done by small rifle caliber bullets; however it cannot defend alone and needs to be escorted by fighters and stay close together with other He-111's in a defensive formation.

Using this bomber in the game in a formation can be extremely rewarding, providing some of the most realistic experiences in the game. To get the most out of this game play, you will need to watch for calls for factory or RDP bombing, and join at least several missions, as rarely its the first one successful.

Flying the bombers of Battleground Europe is a completely different mindset than almost anything else. It's much more the “big picture” in essence than is generally encountered in other areas of the games play. You’ll find that there is an average level of coordinated play with other players that exceeds that of most other areas of the game from a general perspective.

Never take a He 111 out alone if you want to be really effective. Alone they do not survive long at all and rarely make their targets. The real fun of flying this plane on bombing missions is doing it in enormous formations with lots of other bombers and escorting fighters along for the fun as well as the protection.

Team up with other air brigade members with a specific goal and request fighter escort. Bring along a buddy to man the guns and drop the bombs to really increase your odds of hitting the target and getting home. The He 111 level bombsight is very accurate if used correctly, take the time to use the bombing guide in the printed and online manuals and practice offline until you are proficient. Another popular method is dropping in formation on the leader's cue without individual bombsight calculations, which can be very effective and allow you to drop without detailed use of the sight. This is especially useful when bombing larger targets like the RDP factory installations.

Probably the most important role for the strategic level bombers in Battleground Europe is the destruction of the enemies RDP facilities. Slowing the output of their RDP factories will increase how long they must wait for the newer and more capable weapons they are developing and reduce the number of weapons available to their supply systems in game.

When doing a mission you will need to use most of these instruments to hit your target. Happily, most of it is obvious, so you can quickly get in to the game.

Here is a screenshot of the He 111 control panel, with numbers corresponding to the instrument descriptions below. There are also two more indicators (14 and 15) that you must look up over the pilots right shoulder (Mouse look or keypad 5 and 6 keys at the same time) in order to see.

When you initially spawn in you need to do some settings.

Starting Up The Engines

Starting the engine is pretty standard across all planes:

This is the HARDEST part of flying. To be successful you need to follow this guide closely.

Lining Up On Target

From A Far Distance

Called the "Course Pointer" (original German "Kurszeiger") by the Luftwaffe, its American USAAF counterpart is called the "PDI", an acronym for "Pilot Directional Indicator", what the DB-7 would have. Manipulating the 'PDI' is described in detail later. Essentially it is a tool by which the bombadier can indicate to the pilot how far he should turn to the left or right in order to fly straight over the target. The pilot of the plane only needs to know how to read the indicator in order to get the plane lined up for the bombing run. The limits of the range for the indicator is 22.5 degrees to either side, or 1/16 of the compass circle.

The following picture indicates that the pilot should turn to the right.

This picture indicates that the pilot is correctly lined up with the target.

Lining Up By Eye

When you are flying solo, there is seldom time to switch back and forth between the bombadier and pilot in order to use the target heading indicator correctly. A method which works quite well in order to assist lining the plane up over the target is to use parts of the cockpit as a reference. If you line the target up on the red line pictured here, 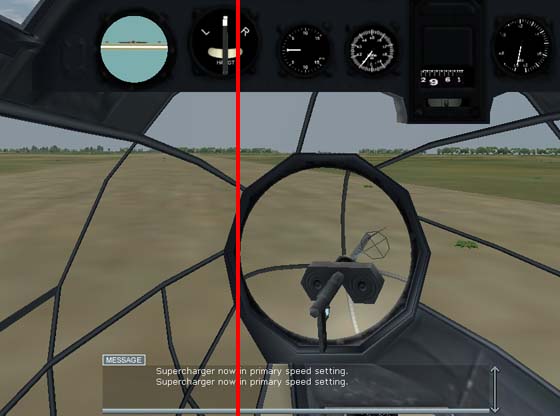 Then you are going to pass quite close over the target.

This is a view from the pilots seat, using the 'look down' key to get a better view of the target when it is close. 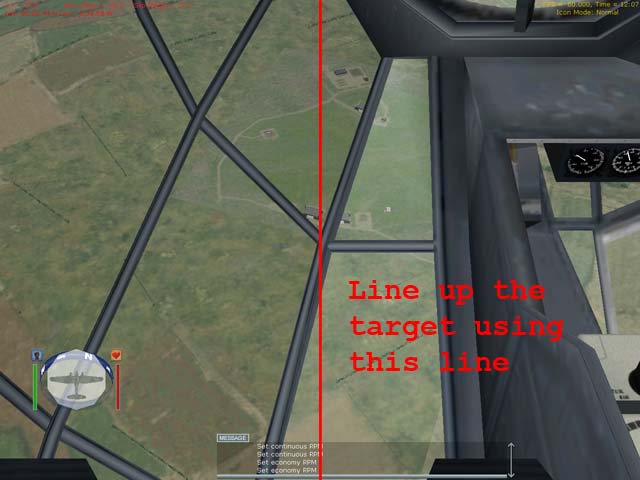 Here's a shot of how the target (lined up in the above image) looks through the bombsight. Note that the vertical line in the bombsight is pretty much the same as the highlighted red line. 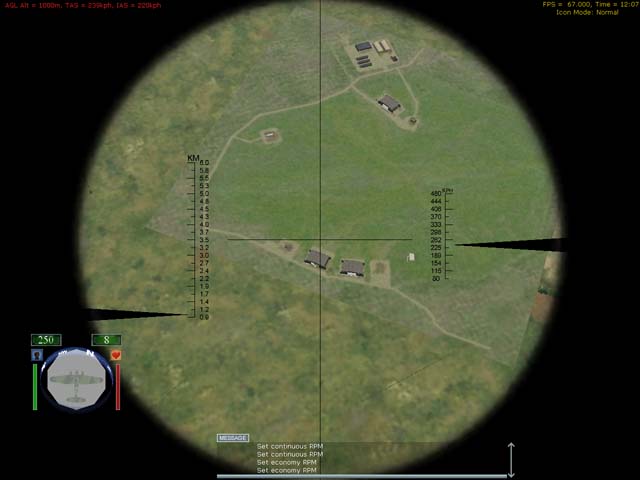 Dated but still good source of information: Thunderace He-111 Guide