Airborne operations in world war two online are often among the most popular type of mission for both vets and new players. Thus an airborne mission can attract a lot of players. Most airborne operations are used to target a side’s AO where the main objective of the drop is to capture the spawn CPS. Some AOs can only be attacked quickly with waves of airborne troops. Targets in the Zees or in England are good example of this.

Other times drop are undertaken when an AO has gone stale and as an attacker you hope the side defending has switched off. These drops in particular rely on the element of surprise as you hope to get as many troops on the ground as quickly as possible.

For the really brave or foolish paratrooper you can attempt to drop on an active AO. This means a pilot has to dodge enemy air, paratroopers have to face the gauntlet of AA as they drop, dodge enemy tanks and other armour once on the ground and finally overcome the waiting enemy infantry in the cps. These drops are rarely successful but if you do manage to somehow survive the drop and cap the spawnable it can be hugely fun and rewarding gameplay.

Lets be honest, most airborne drops don't achieve there objective. You die a lot when you play World War Two online and playing as a paratrooper means you can die in even more ways. you can crash on take-off, be shot down on route, killed by AA during the jump or as typically happens, you land in front of AI.

That is not to say that paradrops are not worth doing, on the contrary. They are great fun, lead to you having a laugh particularly if you are on voice coms and most importantly if you success are hugely rewarding. Just be prepared to fail. Of course you are playing World War Two online. you are used to failing.

For an airborne drop to happen you need two things, paratroopers and a pilot. it is no use standing around as a trooper waiting for a plane to appear nor as a pilot waiting for troopers to appear so before you set up an airborne operation is always worth checking you have interest in both a pilot and boots. Keep in mind that you will take X many guys “off map” as they ride on your plane, so waiting on the airfield for too long and flights longer than a few minutes can suddenly lose momentum in other parts of the map, so be sure to promote missions and get guys as quickly as possible. 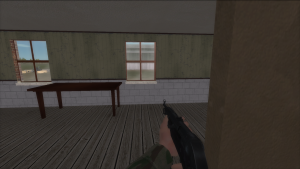 the airborne spawn point. This is the view that greets you as you spawn in.

As a paratrooper you will spawn in at the airfield spawn point. you should then make your way out of the building and onto the airfield. There, hopefully, waiting should be your ride. if the transport plane hasn't spawned in the hanger's close to the inf Spawn, the pilot will usually taxi the plane to in front of the infantry spawn. As a paratrooper, approach the flying coffin and press "F" to board the aircraft. You should then find yourself aboard the plane waiting to take off. Sometimes you will be waiting for more numbers, or waiting for the CPs in town to be hot (so you land at the right moment to capture), so be patient and prepare to wait. (Pro tip: use local chat to crack jokes or sing songs to pass the time)

Before taking off it is worth deciding who will be the jumpmaster to call jump when the target is reached. The jumpmaster is quite often the pilot but not always the case. This decision can be made either on the mission chat or local chat. 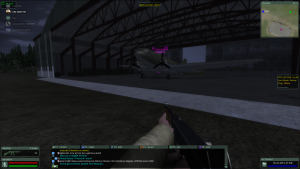 Your flight should be relatively short, but that doesn’t mean you shouldn’t prepare. Look at the town layout before you begin, Be sure to fly in a route that will avoid any risks: don’t fly over enemy towns setting off EWS, stay away from airfields with their lethal Flak AI, and avoid any yellow squares of enemy fighterslooking for an easy kill.

It is helpful to set waypoints on the target CP (or landing spot) to help guide everyone to the right place when everyone drifts to the ground.

This is the where the pilot buts earns their bread and butter, as a for the troops time to enjoy an easy ride.

This is the easy bit for you the paratrooper. All you have to do really is hope that the pilot delivers you safely towards the target area. depending on how long the flight time to target is you might have time to go AFK. whilst flying its worth keeping an eye on your map. It will give you an idea of how long until you reach the drop zone. If the battle is a active battle it will also show any recent marks. As you approach the target it worth putting you map away as you can't jump from the aircraft if reading you map.

After you follow the waypoint which you set as you end up on approach to town, make sure to come in at around 400m/1200ft above ground level (this may be different than the reading on the altimeter if the town is in elevation or on a hill). Choose an angle that if someone jumps a little late, they will be safe in town, rather than in an AB or outside of town in front of AI.

so this is what everything so far has been leading up to and it is the most curial point of the mission so far. The Jump. The pilot has reached the target safely and now its time to descend from the sky and swoop in and cap that spawn unopposed. well that what you hope will happen.... 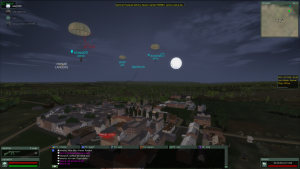 dropping from the aircraft. notice in the chat bar the call GO 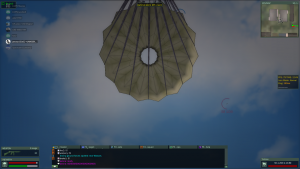 Your map must be away, and chat bar closed to exit the aircraft. When you hear the call to “GO,” either on the chat bar or on voice comms, press F again to jump out of the plane. Don't worry about the parachute as it will open automatically. Use Q and E keys to steer you somewhat left and right if you’re a little off course. This is where you are most vulnerable. You may be taking in coming fire and unfortunealy for there is little you can do about it. Once you hit the ground, you will be in a prone position and your green stamina bar will take a few seconds to fill before you can sprint.

Once your sprint bar has recovered you should quickly get into the target CP or cover and from there watch the chaos unfold.

The jump call should come at about 250m before the plane flies over target (if at the correct 400m/1200ft altitude) the plane must be quite level and at standard cruising speed. (not super-sonic coming out of a dive). If you come in to fast the troopers can overshoot the drop zone and if you come in to low, you do the enemy's job for them. Once all you cargo is safely out the door you can attempt to RTB you aircraft if you wish.