Difference between revisions of "Finding action and gaining rank" 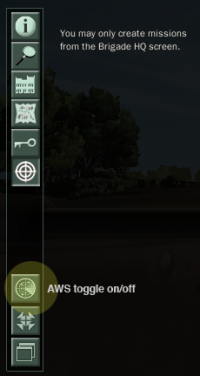 Air Warning System - AWS
The AWS helps you home in on the bad guys and will also tell you if you are in danger or not during cruise to and from the target area. To view the AWS reports, open your map (M) and make sure to have the radar button engaged. Red boxes indicate more than 5 enemy aircraft (EA), yellow boxes indicate less than 5 EA. If a square is not lit either red or yellow, no EA are reported in that particular square. Note that the AWS is not 100% reliable and updates every minute. If you are found cruising in an empty square adjacent to an active square, be on the lookout: you may be “bounced” by an EA coming in hot on your six. An empty AWS square does not guarantee a safe passage! Likewise, a yellow square may not actually contain an EA because it has already moved to an adjacent box - or have been shot down already.

What is it like at the target?
Generally speaking, pilots tend to flock to battles already in full swing – and the location of air battles is largely determined by what the Army is doing. Therefore, the vast majority of pilots tend to fly directly from the airfield closest to the ground battle, usually at minimum altitude and as fast as their crates allow. Once there they will bomb and strafe and generally try to shoo away the enemy in the air. If a side wrests air superiority over the enemy, pilots will immediately turn to strafing and bombing again – until enemy aircraft reappear.

The alternative to fighting in close proximity to an active ground battle is to try and find the enemy on his approach to said battle. The enemy will usually be less alert and often fully intent on reaching the battle area, therefore you can employ the element of surprise and often get away with it – if you avoid low-level turnfighting, regain high altitude after your combat and fly at a good rate of speed.

A few home truths to consider

Gaining rank
You will need to kill something and return to base in order to reap the full rewards and advance in rank. The higher the rank, the better the aircraft you may sortie with. If you are listed as "RES" in the AAR (After Action Report) you will get 50% rank points. If you are KIA however, you will only get a quarter of the full award. It goes without saying that you will want to survive! For easy rank points, look for red flashing bridge icons - strike that bridge with at least one bomb and return to base for 10 easy points.